AgriSompo North America is very pleased to congratulate Sam Scheef, who this week has received two Lifetime Achievement Awards in honor of his incredible leadership within the world of crop insurance.

The two awards were granted by National Crop Insurance Services (NCIS) and the Crop Insurance and Reinsurance Bureau (CIRB). These awards are meant to recognize important, career-long contributions to the crop insurance industry. 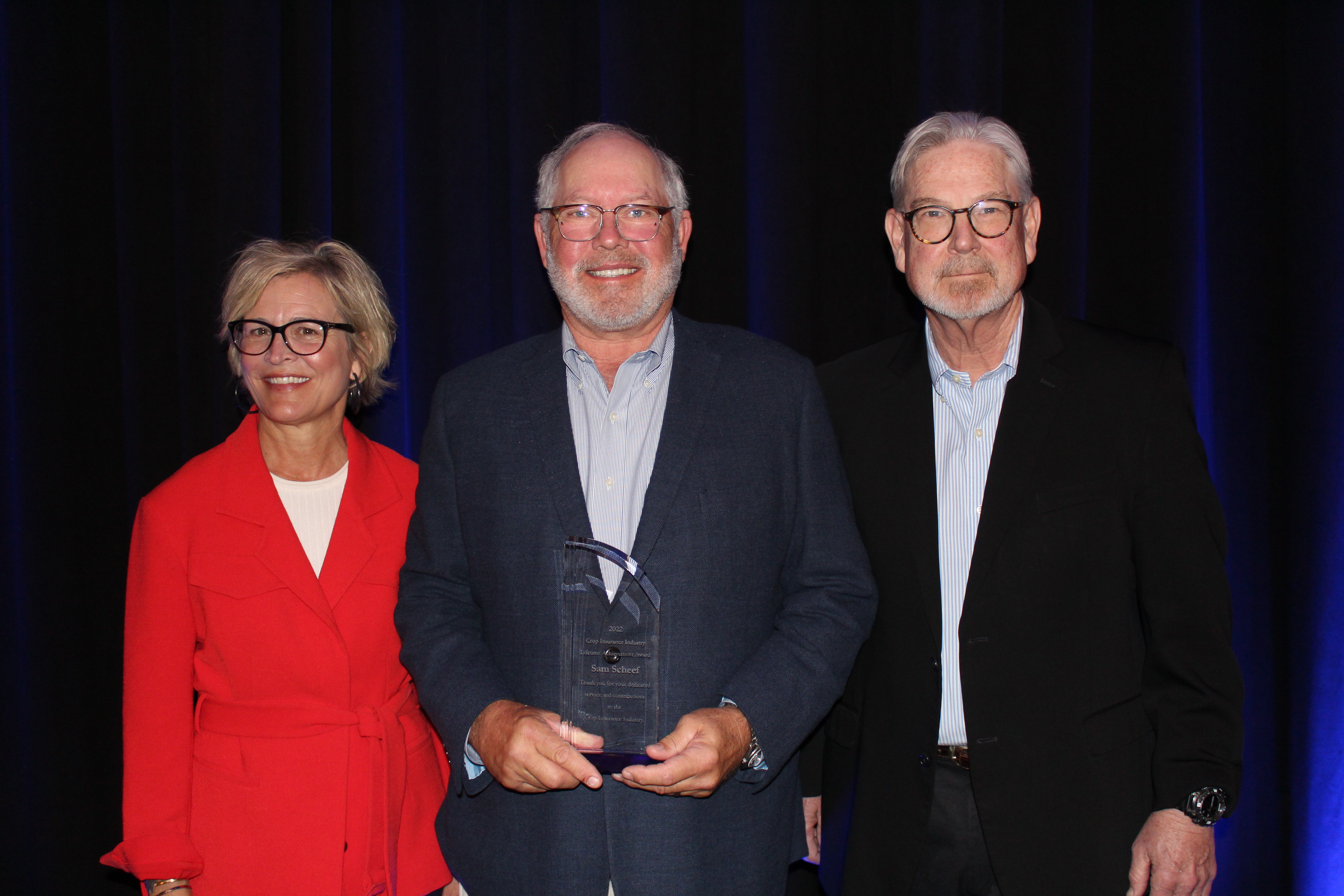 Sam is the founder of ARMtech Insurance Services, one of the organizations which would later combine to form AgriSompo North America. He was among the first to introduce innovative technological efficiencies that continue to influence crop insurance software and processes to this day.

Throughout his career, Sam worked for the improvement and success of both the company he founded and the crop insurance industry as a whole. Through his organizational leadership and involvement in crop insurance advocacy, Sam was a strong voice in the development of the legislation, standards, and procedures that helped shape the industry we know today.

Widely respected for his deep affection for agriculture, extensive crop insurance knowledge, and a passion for pushing the boundaries of technology, Sam Scheef truly exemplifies the core values of an industry leader. 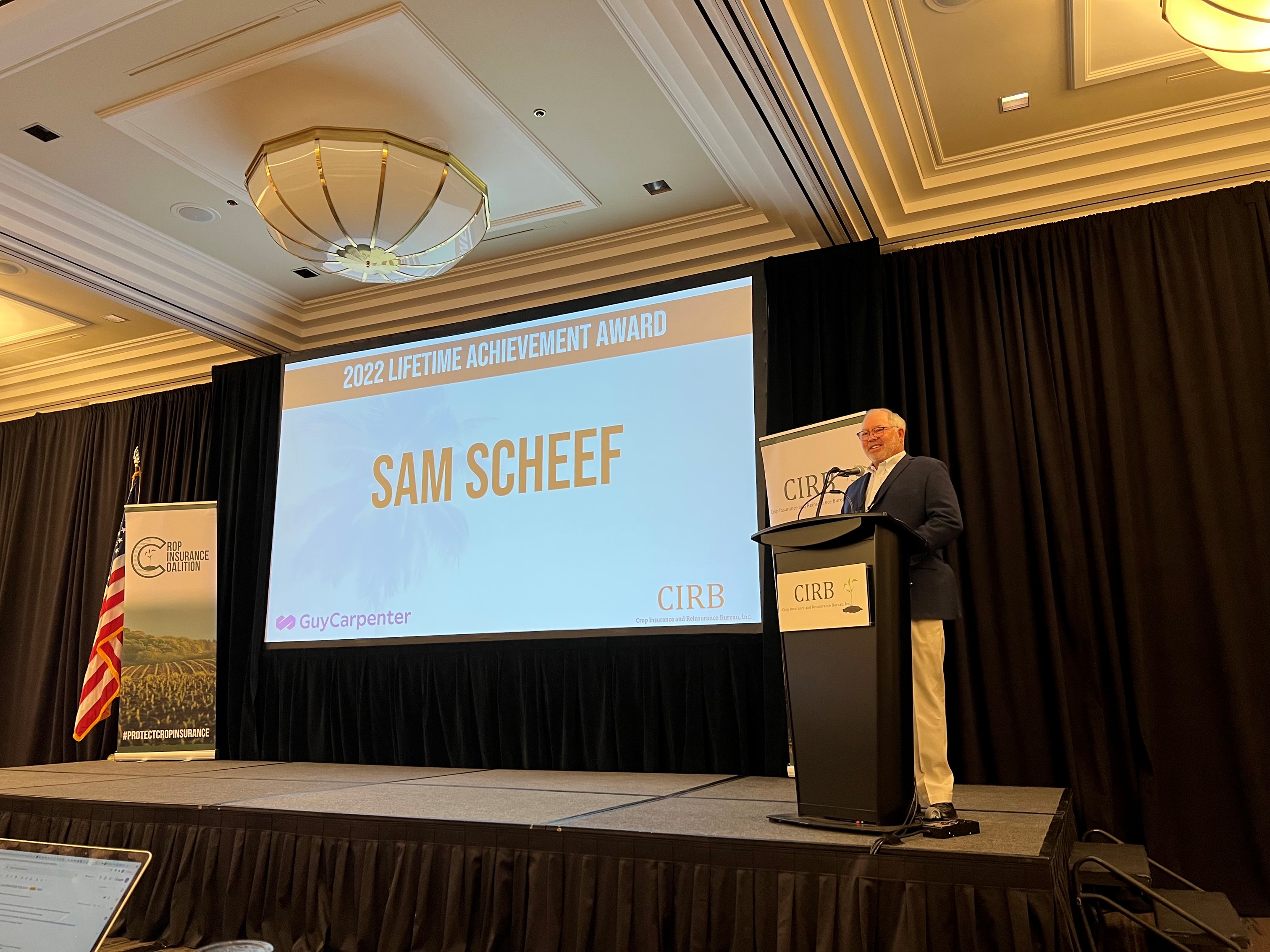 For Sam Scheef, a computer programming project in his twenties led to a 35-year career in crop insurance and the creation of the nation’s fifth largest provider of federally-sponsored crop insurance.

In 1980, Lorenzo, Texas, native Sam Scheef earned a Bachelor of Arts degree in Radio, Television, and Film from Texas Tech University and began working for a radio station in nearby Lubbock, Texas. Frustrated by the manual process of compiling and printing music playlists, Sam relied on knowledge gleaned from a couple of college computer courses to write a program to automate the process.  With that, the trajectory of his career changed completely.

In 1985, Sam began developing software full time. Insurance companies were awash with manual and physical processes, so at the request of a local crop insurance agent, Sam created one of the first programs to automatically rate insurance policies. The project led to further development, and Sam opened AgriPeril Software Systems in the early 1990s to offer the software to crop insurance agencies.

Several years later, Sam created the next generation of industry software by developing the first Windows-based crop insurance processing system for personal computers.  He founded a software company in 1996 to distribute the product: ARMtech Insurance Services.

Over the years, Sam continued to identify areas where business inefficiencies could be solved by technology. With the development of its Document Imaging system, ARMtech was the first Approved Insurance Provider (AIP) to feature a fully electronic policy file, eliminating the need for cumbersome paperwork storage and shipping. ARMtech also revolutionized the way claims were worked and processed by creating a system which allowed adjusters to scan paperwork directly to auditors. The speed and accuracy of the new process made it possible for producers to receive claims payments much faster than ever before. Sam’s vision and leadership were instrumental in the development of both these advancements, and many more.

By the time ARMtech joined Endurance Specialty Holdings in 2007, it was the nation’s fifth largest crop insurance provider. The company became part of Sompo International in 2017 and was combined with Diversified Crop Insurance Services in 2021 to become AgriSompo North America.

Sam relinquished his role as ARMtech’s CEO in 2010 but served on both the ARMtech and AA-BIC Board of Directors until his retirement in 2020. Throughout his career, Sam was admired and respected by his employees and co-workers for being fair and impartial, with an ability to solve problems by applying technology.

Sam’s leadership within the crop insurance industry extended beyond ARMtech. Sam served on the Board of Directors for the American Association of Crop Insurers from 2006-2010 as the representative for ARMtech Insurance Services.  During his time on the Board, Sam served as Chairman of AACI from 2006-2008.

One of Sam’s most notable moments while serving as AACI Chairman took place in March of 2006 when he participated as a witness in a congressional hearing to review the federal crop insurance program.  The hearing was held by the House Agriculture Subcommittee on General Farm Commodities and Risk Management on March 15, 2006.  During that hearing, Sam and the other witnesses provided a general overview of the issues facing the crop insurance program including multiple-year losses, disaster assistance, premium reduction plan, and the upcoming farm bill reauthorization.

Sam also helped chart a new standard of excellence for the Crop Insurance and Reinsurance Bureau (CIRB).  His company, American Agri-Business Insurance Company, was among the first non-mutual insurers to join CIRB, and its membership opened the door to other stock held AIP’s to become engaged with CIRB.

Sam joined the CIRB Executive Committee in 2006 and served as Chair of the organization from 2011-2012. His tenure on the committee occurred during a critical time for the industry, and a monumental time for the organization. With Sam’s input, the CIRB Executive Committee decided to relocate its office from Kansas City to Washington DC to increase its political involvement.  Under Sam’s steady leadership, CIRB also embarked on a strategic planning process that led to the development of the crop insurance coalition which today coordinates crop insurance advocacy across more than 100 industry partners. In spite of the many challenges during this process, Sam’s clear guidance and steady hand combined with his business acumen and ability to look into the future helped place not only CIRB, but also the industry, in a strong position as advocates for the program.

Sam’s commitment to crop insurance is rivaled only by his devotion to his family and community. One of the founders of Peoples Bank, Sam served on the Board of Directors for 19 years. He currently serves on the Board of Directors for High Point Village, the Texas Tech Therapeutic Riding Center, and the Lubbock Chamber Orchestra. A licensed pilot, Sam is the Chairman of the Lubbock Preston Smith International Airport Advisory Board. Sam is married to Jana, and together they have a blended family of five adult children and three grandchildren.

Find An Agent Near You

To learn more or to find an AgriSompo North America agent in your area, please fill out the nearby form and we will contact you shortly.

AgriSompo North America is one of the nation’s largest underwriters of federally-sponsored crop insurance. We’re dedicated to protecting the livelihoods of farmers and ranchers by offering direct and customized agribusiness risk management products through a nation-wide network of exceptional independent crop insurance agents.